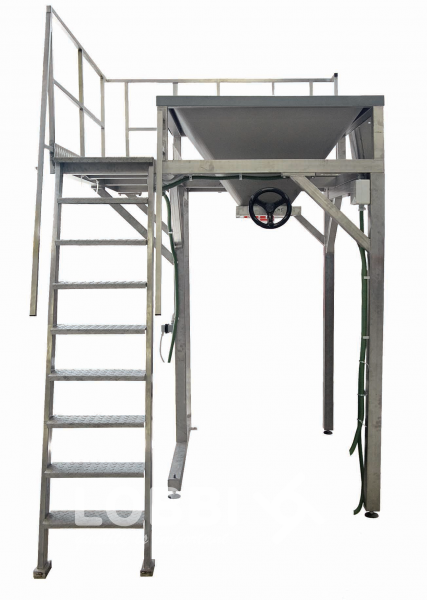 The hopper is accessible by a ladder, while the platform mounted on the LP model makes its cleaning even easier.

The inside of the hopper can be Teflon coated, on request it can be equipped even with an oil spraying system (for sticky dough).

The funnel is accessible from the ladder, and the platform mounted on the LP model makes cleaning even easier.

In case of an automatic production plant a system of sensors and switches controls the level of dough in the dough divider's hopper and regulates the hopper's dosing flap accordingly.

Possibility of choosing the hopper according to technological line.

There is a dosing flap mounted on the bottom of the hopper, which assures a controlled dosing of dough into the divider's hopper. The dosing flap can be regulated manually (R version) or by a pneumatic cylinder (P version).